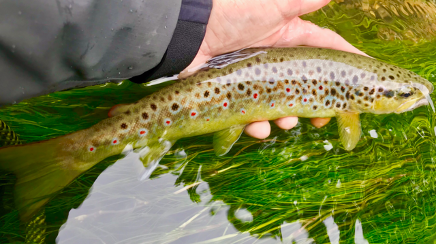 The compensation was paid to a Fish Legal member angling clubs whose fisheries was devastated in by a slurry pollution incident.

Wellow Brook Fly Fishing Syndicate received £11,108 in damages from Mr C Brunt / Brunt Partners of Clandown Farm, Radstock near Bath after a farm slurry lagoon collapse released a “tsunami of slurry” into the club’s wild trout fishery in February 2013. The pollution was traced to the failure of a retaining wall of a cow slurry pit constructed of sleepers.

The farmers were slow to respond to the pollution, slow to report it to the Environment Agency and their emergency procedures were inadequate. Despite that they were not prosecuted; paying £5,000 in an ‘enforcement undertaking’ to the Bristol & Avon Rivers Trust instead of a fine. The same farmers went on to pollute again in April 2016.

Cameron Hogg, Solicitor at Fish Legal acting for the Wellow Brook Fly Fishing Syndicate said: “Unfortunately, pollution claims involving escapes of farm waste presently make up a significant volume of Fish Legal lawyers’ caseloads. Farmers should be aware that failing to invest in and manage proper storage is a false economy given that our member clubs will come after them for compensation if their fisheries are polluted.”